Grab your buckler, your D-20, and a few pints of grog or generic citrus soda for this one.

Legend has it that within the construction site of the new Milwaukee Bucks arena, the Night Walker has created a taxpayer-funded malicious maze that is stalked by monstrous Milwauk-o-taurs. Commanded by the necromancer Reince Priebus and the Barons of Koch, The Night Walker has captured the two fated heroes and trapped them in the belly of this evil edifice.

One hero –Sanders the Bar-Bernie-ian – is on his last journey, an old and powerful paladin that has captured the hearts of the young and hip. With his trusty crowdfunded clay-more he has broken through the armor classes of inequality. But now, his muster shall be tested against the snares and pitfalls of the most dangerous campaign.

The other is a clever rouge – Joan of Arkansas – from a prestigious family. Where her money fails, her guile and charisma rebound. Her name is established well, but her enemies grow in number. Nevertheless her cloak and dagger skills of misdirection only gain her more footing toward the seat of High Chancellor. And finally, she has a true challenge: escape The Night Walker’s snares, and leave the rival.

What you will need:
– Shears
– A piece of eight
– A magical glowing rectangle
– A printer and Legal-sized bleached paper

Cut the pieces out with your shears and assemble the board. The character pieces work like finger puppets. Place the cards on the appropriate icons and put one Milwauk-o-taur in each lair marked by a donkey skull.

Each adventurer has a range of spells in their codex. Help them unlock doors on their way towards treasure and freedom. When the particular candidate/paladin utters the spell in the adjacent room the hero can proceed. If the room contains a treasure or Kennedy’s Eternal Flame, take one card.

Be warned. The Night Walker’s Milwauk-o-taurs will no doubt attempt to pin the adventurers against each other. The first to exit with the most treasure will be the only one to survive…

The deadly Milwauk-o-taurs stalk the labyrinth at the metion of The Unmentionable Ones (any Republican candidate)! When an Unmentionable One is named, while a player’s candidate is talking, the opponent get to flip a piece of eight. For each heads the opposing player may move the Milwauk-o-taur of their choice two rooms over. Move one room for tails. If the monster catches up to a hero, they will return to where their journey began. However, if the Candidate possesses Kennedy’s Eternal Flame, they may use this to repel the Milwauk-o-taurs back to their lair. Discard the flame afterward.

Will our heroes be able to evade the Milwauk-o-taurs and make off en route to Charles Towne? Find out with the Neckbeard approved Liberals in Labyrinths Democratic Debate Game!

Liberals in Labyrinths board and pieces 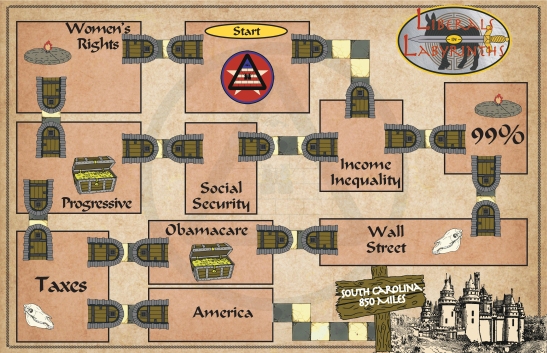 This entry was posted on February 11, 2016 by Weird Voyeurism in Politricks and tagged debate.