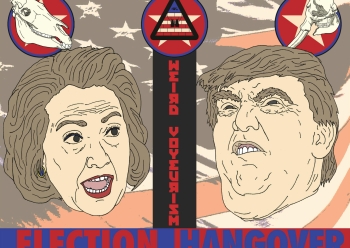 It’s all done, and he won. Browse as we recap state by state.

Nothin’ like depression and anxiety on Election Day! So take a load off and play America Drinks! Choose your network and talking heads and get to it! CNN ABC CBS … Continue reading →

Gas-up your war machine, slap-on some feathers and leathers, and tune your CB Radio to the Emergency Broadcasting band as we head to New Vegas for the final battle between the War Lords!

I Symbol the 90s Debate Debingo

Log out of your AIM account, turn down the Nirvana playing on your Walkman, and change the channel from the latest episode of Friends to CNN, as we head back to the 90s for the second Presidential debate!

The podiums are up, the auditorium is decorated, now all the V.P. candidates need is an attentive nation – and maybe a Facebook friend or two to help them harvest the crops. Welcome to Farmville: the town that you thought was a flash game until last week! The obscure Virginia hamlet is an appropriate location for the candidates that we’ve heard almost nothing about. While the main contenders try to cover up their most recent indiscrepancies and vindictively tweet at each other through the night, it’s time for “Boring” Kaine and “B-List” Pence to have their brief and inconsequential moments in the sun.
Let’s face it, the V.P. Debate is hardly the social event of the campaign season. It’s unlikely that either Kaine or Pence will encourage people to look up sex tapes, accuse the other of being a Kenyan, or breathe heavily and creepily into the microphone for an hour and a half. Even the most die-hard political junkies will probably be paying more attention to their cellphones than CBS. It should be about as boring as watching digital crops grow.
With Weird Voyeurism’s Farmville Vice Presidential Debate Game, add some organic flavor to this bland discussion. First, print-off the candidate cards and the harvest sheet. Cut out the produce, and tune into the debate. As the candidates say the various phrases, move the fruit or vegetable to the candidate’s respective basket. Whoever has the biggest harvest by the end of the debate is the winner! Alright, the game’s not as entertaining as CandyCrush, but neither is the Farmville Vice Presidential debate.

As the the first presidential debate kicks up there’s only one important question to ask:

Who can build a wall faster?