Race to the Reichstag!

On January 30, 1933 throngs of adoring spectators gathered around a stage in Berlin to await a speech from a megalomaniac with a shitty haircut. The country had been through some pretty rough times. Over the previous decade-and-a-half, they had experienced unexpected military defeat, a crippling recession, and the loss of status as a global power. Fortunately, the newly elected Reich Chancellor was about to turn all of that around.
Eight decades later on a campus in Iowa, another man with a shittier haircut plans his own media Putsch. Utilizing a reactionary, disenfranchised, under-employed and uneducated base, a politically incorrect, plutocratic populist plans to push the nation to the far Right. With Race for the Reichstag, you can join Trump as he shows his plan to Make America Uber Alles Again!

The rules for Race for the Reichstag are about as simple as Trump’s speaking-level. First, cut-out the Hat Tokens, and place the peaked caps over the various Nazi platform squares. After that, turn into whatever-the-Hell Trump’s doing instead of the Republican Debate like everyone else with a pulse. For every Nazi-esque sentiment expressed by Trump, replace the peaked cap in that square with a “Make America Great Again” hat. Get four hats in-a-row and you win! We’re usually not one to take Nazi insinuations lightly, but if Anne Frank’s step-sister is alright comfortable with the comparison, so are we.

For those of you watching the actual debate, do the exact same thing: there’s really not that much different about any of the candidates!

Race for the Reichstag board

Race to the Reichstag Hat Markers 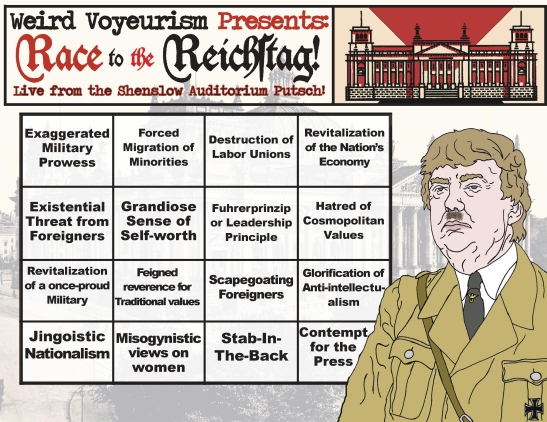 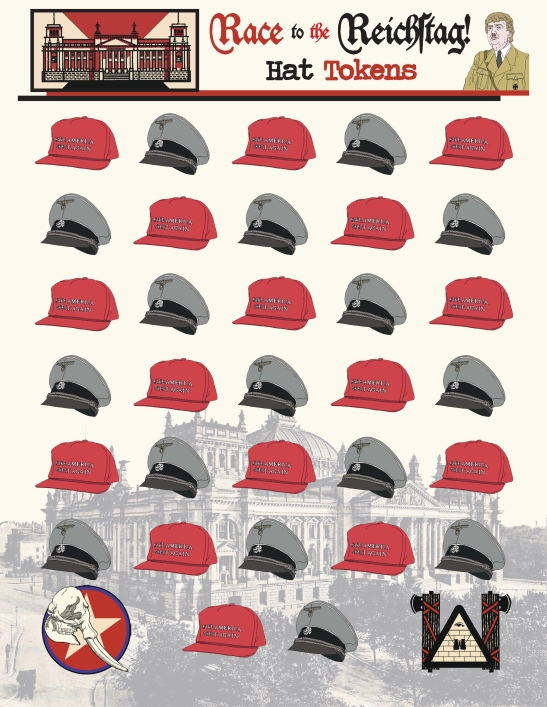 This entry was posted on January 28, 2016 by Weird Voyeurism in Politricks and tagged debate.